A bold move: putting a common question to the test

I recently purchased a few BGS RAW review cards from a vendor of mine. Usually I submit them to BGS if already RAW graded. But I thought it would be fun to cut them out and see what PSA would say. Yes, BGS does not guarantee the RAW grade, and yes, one could say the card could be damaged or condition affected when taking it out. I’ve been handling cards for about 25 years, so let’s say that the latter is not a factor in this exclusive test!

First, I had a BGS raw 5.5 1953 Bowman Color #121 Yogi Berra – Beckett has a NM currently at $800. Examining it myself, it had some sort of faint left border – top to bottom – raised surface bubbly line or crease… I couldn’t exactly tell what it was, but have seen this before on Bowman Colors. Interesting. The result: Next I had a 1965 Topps #526 Athletics Rookies card – nice SP Rookie of Catfish Hunter. Taking it out, I had no quams about it being NM. Great centering, so what the heck – no reason to not send it in. Results of this were as expected: Third up was a 2011 Topps Update Gold #US175 Mike Trout. Looked like mint to GEM mint corners, near perfect centering and…. ugggghhh….. a nice streak or surface rub on right side of card. I wonder what will come of this. Maybe, a .5 half grade is warranted at least? But, there’s no turning back now. Drum roll: Next is a 1957 Topps #35 Frank Robinson RC. Overall decent corners, although a little ding top right. Clean surface, and a bit of ink remnants from production can be found on front. SUPER sharp edges. This is what came of this: Last but not least was a 1972 Topps #79 Rookie Stars/Mike Garman/Cecil Cooper RC/Carlton Fisk RC. Almost not even worth it at $50 BV – either with BGS or PSA… even if it gets the 6.5… but I am awful curious. Can’t see anything wrong, just off centered and…. WOAHHH!!!!! : Didn’t even think to look at the size given that it was BGS reviewed. Oh well. I guess I would have been better off leaving them in and submitting to BGS.. I’ve never had something not meet the reviewed grade when sending in a sealed raw card…. but I guess I’ll never know! 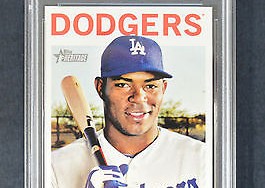